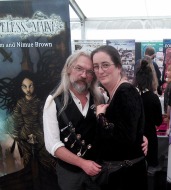 Hopeless, Maine is all about community, multimedia creativity, good stories, and tentacles. People (and others) are very welcome to come and play with us. Leave a comment if you want to get involved and we’ll email you. We welcome strange, gothic, and Hopeless inspired things, in any form.

Hopeless Maine has a core team defining the project and many people who get involved with that material to expand and enrich it. The project began with Tom Brown and an intention to make graphic novels, possibly with soundtracks. Tom defined the island, its look and story and key characters. From about 2008, Nimue Brown has shaped the stories of island life and expanded the project to include performance, novels and songs.  Dr Abbey joined the team in 2020 expanding the story of the island beyond the graphic novel series.

Other key contributors working within the existing material are many. On the blog we have Martin Pearson (Squid and Teapot) Nils Visser (Diswelcome) and many others. We’ve had musical contributions from Professor Elemental and The Army of Broken Toys, and others.  Keith Healing and Alan Bahr have created a Hopeless Maine role play game. Keith Errington has written a novella – now published by Outland.

Meredith Debonnaire came in as a blog contributor, but her Annamarie story is so important to the project as a whole that it features in Optimists, and informs the future shape of Hopeless.

There’s a massive crew of people working on the Hopeless Maine film. They’ve got a whole page to themselves. 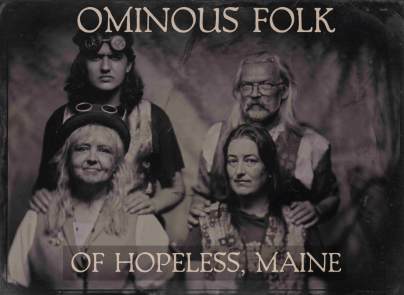 For the performance side, Tom and Nimue are usually joined by Susie Roberts and James Weaselgrease. Folk songs – often ominous – original material and plays.

We’re delighted that Sloth Comics have taken the bedraggled denizens of Hopeless in, and given them shelter… you can buy Hopeless Maine graphic novels from all manner of places, more on that here.  In the US, we’re published by Outland Entertainment who are releasing the graphic novels as larger, hard cover editions. They also publish the game and the prose fiction.

To contact individual blog creators, please post a comment on this page. If you want to book us as performers, exhibitors or have some other curious scheme in mind, just comment. We can pick up your email address from it and get back to you.

8 thoughts on “About Us”