If you backed our kickstarter a few years ago, you may already have copies of New England Gothic or The Oddatsea. You may have since managed to acquire one at an event. But, maybe you didn’t, and maybe this has left a gaping hole in your bookcase…

Much to our delight, Outland entertainment (who are publishing American editions of the graphic novels) are also publishing the prose fiction. It comes out in August and is widely available from book selling places, including…

And in the UK…

(Also Amazon in the UK, but, other places are less likely to spend your money on going in to space).

And here, for your delectation, is Nimue reading a bit of New England Gothic

One of the wonderful things about Hopeless, Maine as a project is that the creators, Tom and Nimue, have opened up their world for others to play in. It’s a lovely, generous and munificent (love that word) gesture and it has resulted in some amazing and very talented people contributing to a glorious shared unreality.

And then I came along.

As many of you may know, I was responsible for the Hopeless, Maine Kickstarter last year where we launched two illustrated books, Nimue’s New England Gothic, and my own The Oddatsea. I thought I would write about how I came to write my story, the choices I made and why I made them.

The Oddatsea is actually composed of four short stories, that together make up the whole tale. The first was called The Prospect of Joy – and this is how it came about…

What attracted me to Hopeless, Maine? Was it the atmosphere? The dark humour? The weird creatures, amazing characters or the tentacles? There is no doubt I have come to love all those things, but if I am totally honest, it was actually the idea of playing in some else’s world that attracted me the most. I know I write best with limitations – give me some boundaries, some rules and I will creatively sidestep and subvert them. Basically, I like a challenge.

I had long wanted to contribute something, and my passion is for short stories. (Actually, my real passion is for a long novel, but my patience and attention span don’t seem to want to play ball!) Working for myself, and – fortunately – being very busy with work, meant that finding time to write was always going to be a problem. But in the beginning, I had an even bigger problem. I knew nothing about Hopeless, Maine!

Yep. I started my story knowing zilch, nada, nothing about the world in which my story was set. So that was my first challenge – how could I write a story set on an island I had never visited; metaphorically or otherwise? Oh alright, I had read the first graphic novel, so the one thing I knew was that you could never leave the island – and that was pretty much the only rule I was given when I asked Tom about what I could and couldn’t do. (Yes, I know I eventually broke it… twice!).

And that gave me an idea.

At what point did this mysterious power that stopped you leaving the island begin? It seemed to me that if your ship was in trouble off the coast – you were inevitably headed to Hopeless. But how far out at sea did the dreaded pull of Hopeless, Maine extend? It must end at some point? I started to think about a sort of aquatic Lagrange point – a point of no return. What would happen if someone travelled to that point and got stuck there – caught between trying to leave and the unnatural lure of the island?

My literary childhood had been all about ‘hard’ science fiction, Asimov, Arthur C Clarke, Phillip K Dick, John Brunner, Richard K Morgan, David Brin, Herbert, – I was voracious, reading up to five books a week. Over time I read other science fiction (softer?) and eventually even other genres, but my earliest love was for science fiction. These days I also consider myself a steampunk – I just love that juxtaposition between history and mad science.

Oh, by the way – no spoilers lie ahead if you haven’t read The Oddatsea*.

I decided my story would have elements of science fiction and Victorian steampunk – harking back to Verne and Wells. But I also wanted it to fit with Hopeless, Maine – and for that, I drew on Lovecraft to a certain extent – his weird, literally maddening stories and dark sense of humour. (Well, I think he’s funny anyway).

I chose a female protagonist because I love strong women and it suited the story – I needed a rebel – someone who would go further – what could be more rebellious than a woman in Victorian society who is an explorer, an adventurer and takes no nonsense from anyone?

And I chose a submarine as her chosen mode of transport in the tradition of Verne and because I wanted something different – something that hadn’t travelled to Hopeless, Maine before. We knew ships became wrecked on the rocks of the island, but how would a submarine fare? It was a delicious unknown.

As I found time to write, you will be pleased to know I also found time to read all the graphic novels, and eventually as much of the Hopeless, Vendetta (this very website dear readers), as I could. So about two-thirds of the way through the story, I was as well-versed as I could be in the shared delusion of Hopeless, Maine.

The way I write is quite organic. Oh, I used to plan a story, plotting out every twist and turn, every character and every scene. But the problem was that this was all done in my head. And when I came to write it, I just couldn’t be bothered! As in my mind, it was already written – committing it to paper just seemed a painful chore.

I know to avoid that now. I start with a vague idea and a couple of characters – perhaps an overall aim of the story – but no more. And most of the time I do not even have an ending. I just start writing and it takes on a life of its own. This means that the way the story unfolds and what happens to the characters is probably as much as a surprise to me as it is to the reader! Anyway, it might seem peculiar and ill-advised, but it seems to work for me.

The Prospect of Joy was conceived as a single standalone story – and definitely not part of a quadrilogy (clumsy word – maybe that’s why writers stick to trilogies!). But I didn’t want a straightforward ending – in keeping with the overall feel of Hopeless, Maine, I wanted something unresolved, something uncomfortable, something where the reader could envisage their own resolution. On the other hand, I hate stories that just fizzle out – so, although ambiguous, it needed to feel like an ending.

In the end, I was fairly pleased with the way the story turned out – and even better, Tom and Nimue seemed to like it too. (Or perhaps they were far too polite to tell me they hated it! I did tell you they were very nice people didn’t I?) But as I finished it, I realised something. It was crying out for a sequel, by posing the ending as a sort of intriguing what happens next, I was caught in a fiendish trap of my own making. I knew I had to write a follow-up…

*just WHY haven’t you read it?

And also, you can get copies of the Oddatsea over here – https://hopeless-maine.backerkit.com/hosted_preorders 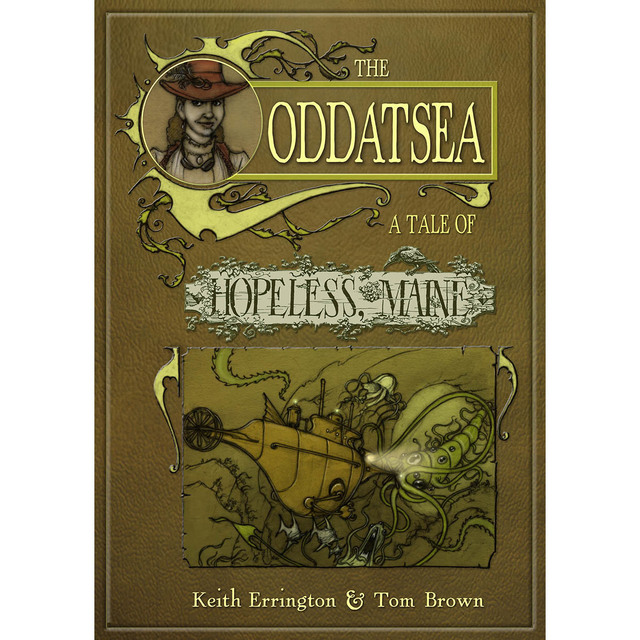 Those of you who followed the kickstarter obituaries last autumn may have noticed the presence of The Hopeless Maine Scientific Society. Membership of this organisation is generally a death sentence, and this picture, of the four key members, gives you some sense as to why!

This is a two page spread from the next Hopeless Maine graphic novel, and like most of our two page spreads it has nothing to do with the rest of the story. It is a peek into island life. What we’re doing in addition with these two page spreads, is to feature actual people who have played a key role in the Hopeless Maine project. And while these dodgy scientists may be the kiss of death on the fictional island, in real life they are hugely important to us.

The young man setting fire to the tablecloth is my son and heir, James Weaselgrease (his steampunk name, not his real name). James is central to our song-based performances, and this is his second time in a comic. If you look closely, there’s a much younger him on a two page spread in The Gathering.

The gentleman holding the tablecloth is Robin Treefellow Collins, who is responsible for the hairy coffee, and who has written a number of ‘Daphne’ stories for this blog.

Next up, a justifiably worried Keith of Mystery, aka Keith Errington, who is responsible for Hopeless Maine prose novel The Oddatsea and without whom we would never have managed a kickstarter. He is an organisational force to reckon with. He’s also performed with us, and is responsible for the Hopeless Maine Home Companion, without which there would never have been a Spidermilk Biscuit song!

Finally, breaking the fourth wall to stare at you from the right of the image, is Keith Healing (whose title I won’t mention as he didn’t get the most dignified nickname). Keith is responsible for the Hopeless Maine roleplay game – an epic attempt at taking the madness of Hopeless and turning it into a coherent and playable system without sacrificing anything much of the magic and mystery.