Clothes are much more reliable than the idea of clothes.

What is presence? Memory and the idea of self. Who we think we are, or were, or should be.

When a person is calm, it is easy to remember what was considered proper. The correct fall of drapery. What to hide, and what to cover and what to walk through this world pretending does not exist.

Having feelings makes it all so much harder. Feelings without a body make so much less sense, because feelings belong to the body that no longer exists. With feelings, it is harder to concentrate and so I do not always remember what of my body should make itself known. More often bone than breast, but it is all equally indecent in its own way. It is easy to reveal too much and the afterlife lacks for privacy.

Feelings and thoughts – these are the most real things. I clothe them accidentally with memory, with my resting bones and half recalled face, with the idea of clothes and a lingering desire to uphold the kinds of standards the living would appreciate.

Does my skull trouble you more or less than my nipple? I cannot ask, it would be one immodesty too far. One indecency too many. I know this. I just cannot, for the life of me remember why it was so important. Why one shred of memory is more indecent than another.

These are just ideas about who I used to be, but the living are fragile and a human body is such an ephemeral thing.

If you’ve read The Gathering, you will have encountered Miss Calder- it is she who opens the door when Annamarie Nightshade brings Salamandra to Pallid Rock Orphanage. Things do not go well for Miss Calder (spoiler alert) as a direct consequence of young Sal’s night wanderings.

If you haven’t read The Gathering and don’t want to know about the details yet, step away from this blog post now! 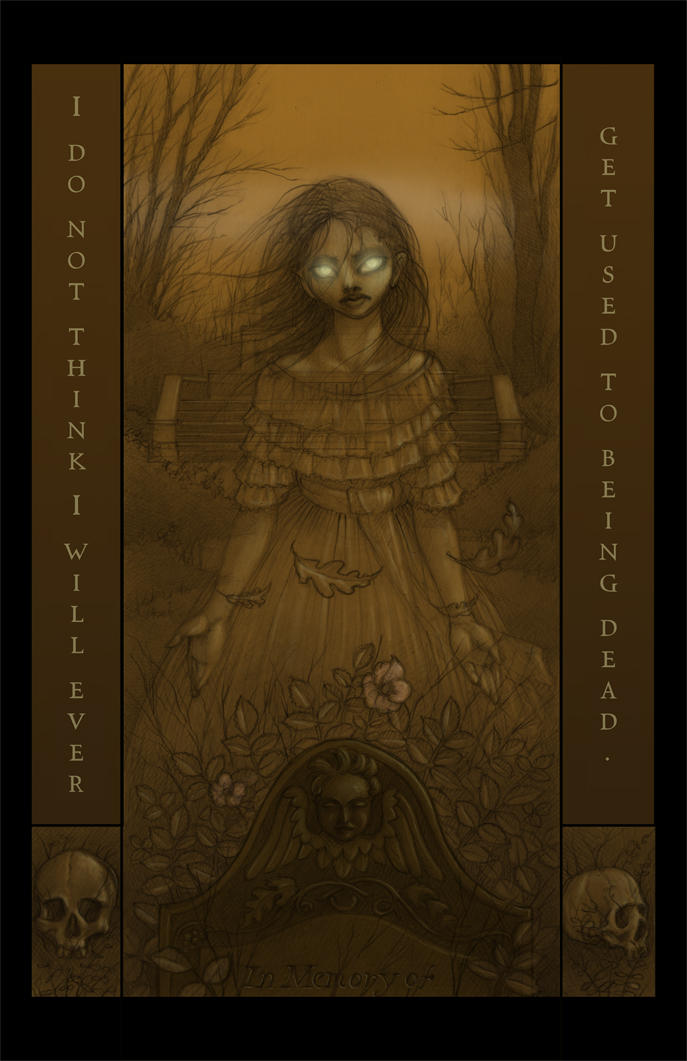 During The Gathering, Miss Calder dies. In that book, she comes back as a ghost, and from then on simply continues to work in the orphanage, comforting traumatised children with stories about vampire feasts, the martyrdom of saints and what happens when you die. Her memory is patchy on this score, but she’s not squeamish.

As a ghost, Miss Calder does not age. As Owen Davies has grown closer to her in age, she’s developed something of a crush on him. She’s a little embarrassed about this because she’s known him ever since he was a snotty, dribbling toddler. Also, her skull shows sometimes when she isn’t concentrating, and Owen isn’t good for her concentration, which is awkward.

Miss Calder’s mother was a member of the Penobscot tribe, local to the area. She assumes her father was a man called Calder, but knows nothing about him. She came to the island voluntarily in her late teens, fascinated by the name, and the stories. Her mother called it ‘that place we go to when we are young and stupid and have something to prove.’ Miss Calder’s mother had clearly made the journey and survived to tell all manner of tales. However, by the time Miss Calder made her own attempt on the island, getting out had become impossible. Even in death, it is notoriously difficult to leave.

Miss Calder has taken to death very well. She feels deeply motivated to prepare her young charges for the harsh realities of life, and death and to set them a good example. Having set out to learn about the mysteries of Hopeless, Maine she is quite at ease with having become one of them.

She does have a first name, but it is a private matter and she has never felt moved to share it with anyone else on the island.