Ancestry is very much part of the Hopeless Maine story. The Jones family claims to descend from pirates, while the Frog family show every sign of having originated in Innsmouth. The island celebrates its Founding Families.

Unlike most of America, Hopeless was not occupied prior to the arrival of settlers from further afield. In local indigenous languages it is referred to as The Place We Go When We Are Young And Trying To Prove Something. There are four tribes associated with the Maine area and I’ve tried to be careful around both honouring their existence and not putting this story on to them. The island is a silly place to live, and local people know that. The founding had everything to do with white capitalist exploitation of resources, and since the resources went away, has mostly been populated by people from shipwrecks.

On her father’s side, Salamandra is descended from one of the founding families – The O’Stoats. This is a family with a long tradition of murder, and unpleasant occultism, often combined. Her father – Durosimi, is present in the graphic novels and you can find her paternal grandfather in New England Gothic. The grandmother on this side is a significant absence and I might seek out her story at some point.

Salamandra’s mother, Melisandra, is a bit of a psychopath and we also see her in the graphic novels. We meet Balthazar – Melisandra’s father, but her mother has also existed as a significant absence. I’d suspected for a while that she might be a mermaid.

This year we started looking at the mermaid grandmother in earnest. Her name is Alraune – which is German for mandrake. Dr Abbey named her as part of the project we’re working on together. So far, we have one image of her, although clearly there will be more, and it will be interesting to see more of her mermaid form as we progress. It’s also been interesting exploring the dynamics between three generations of magical women, none of whom really get on with each other.

Things we know for sure about Balthazar Lemon – he is Salamandra’s grandfather, by dint of being Melisandra’s father. He is an inventor and built the lighthouse. He has a bit of a thing about fish.

Things we do not really know about Balthazar Lemon – what he did after the end of The Gathering. How he build the lighthouse. Why he has a bit of a thing about fish – although when questioned about this with regards to the fish powered church organ, he responded by asking what we though God smelled like.

His imagery suggests Chinese origins. Balthazar is more of a Middle Eastern name. Lemon is not a surname to naturally go with either. I do this on purpose. Partly because the population of Hopeless is diverse while the author lacks sufficient knowledge to accurately portray people from everywhere. Partly because I like ambiguity, and uncertainty, and combining names and imagery in ways that are out of kilter is a way of doing that. Partly because Hopeless is not neatly part of our world.

We never see Salamandra’s maternal grandmother, we only hear about her occasionally from other people. She’s one of the many invisible women in the story. In the second half of The Gathering, Sophie Davies tells Salamandra a story about who her grandmother was. While we never deal with this in the books, I’m about 90% sure that Sophie was lying about some of the details, and that she wanted to give young Sal a story that would help her deal with her actual family. Taking into account how Balthazar feels about sea life, I’m fairly sure that the woman who was never known to anyone as ‘Mrs Lemon’ simply returned to the sea. She may have been something a bit like a mermaid. For all we know, she may still be out there. 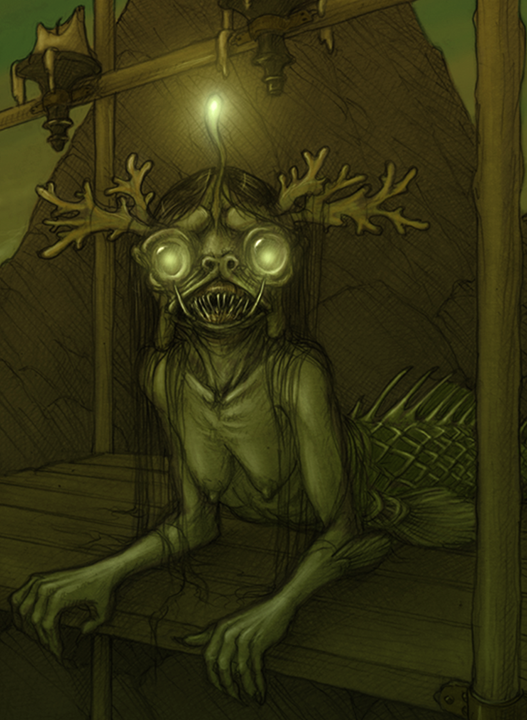 We now continue(and conclude)  our adventures at Time Quake. Part one can be found here.

Once the Mermaid puppet (which was made by the frankly rather amazing) Lou Pulford , she became the focus of much attention and affection. Here is photographic evidence of this.

Also, we were visited (as you can clearly see) by this utterly splendid steampunk R2-D2 which made friends wherever it roamed (and it roamed everywhere)

We also sang the songs of our people (By which I mean songs of Hopeless, Maine, or songs that would fit in there) Nimue has written a Hopeless, Maine sea shanty (during which I groan disconsolately ) and she is expanding our repertoire all of the time. (because she is amazing like that)

During a slow moment on Sunday, Nimue and I sat down and sketched for a bit. (with people watching, which always feels a bit like performing without a net) We had noticed that we had no woodland fauna for Hopeless, Maine and set about to remedy this. I am particularly pleased with the Goblin Cup. It is a bit like a pitcher Plant in that it waits for things to fall into it and then digests them. With the appearance of people on the island, it became aware that it could easily be mistaken for a cup in the gloom and filled with things that were much to its liking (beer, for instance) Now, we get to imagine what a drunken Goblin cup might get up to! The Small Brown Bird features in the Hopeless, Maine book that Nimue is writing at present. It is an excellent mimic (at the worst possible times) The Tree Creeper has no legs to speak of, but rather long toes. It can not take flight from the ground, and so, must creep up a tree using its toes until it can reach a sufficient hight for take-off.  The Ur deer…I’m still not sure what’s going on there, but i’m sure we will find out in time! I am fairly sure that the Puff Bug has a detachable head.

As I said in the first installment, this was an utterly brilliant event and the first of its kind. It will be ongoing, and we can recommend it.

For more information, you might wish to visit, here.

Last weekend, we had a bit of an adventure and brought Hopeless, Maine to Manchester (UK) We are basically hobbits (Eldritch Hobbits, naturally) and can only be lured away from our shire for the most excellent adventures. This was one such. Time Quake was a bold experiment put together by the same people who bring you The Asylum Steampunk Festival.  (Which is the largest, and my opinion, best steampunk event in the world) Thier involvement meant that this experiment was bound to be a success (Spoiler- it was)

We set up as the Hopeless, Maine tourist information stand and prepared to educate the unwary about life on our strange little island off the coast of Maine. We were armed with creatures, books, strange bunting, oddities, and the lovely tourist info posters drawn by the esteemed Cliff Cumber. Also- we had leaflets on island history and a piece by the mysterious Eldrich Bunting, explaining why you should choose Hopeless, Maine as your next vacation destination.  Here are some images from the event. I will be back after, for some more saying things to you.

At long last, we got to meet Lou Pulford and her lovely family!She has written some of our favorite Vendetta pieces and has written for the Hopeless, Maine RPG as well and…we are just massive fans of her in general. She presented us the amazing mermaid puppet shown above.

One of the things that draws us to these events is the chance to meet new people, be inspired by their creativity and to see people that we do not get to have time with otherwise. Two of these people are shown above. Dr. Geof is an actual genius and one of the loveliest people in the world at all ever. If you are part of the steampunk community, you are almost certainly aware of him. If you are not aware of him, click that link and your life will be improved. Pictured at the end is Ian Crichton. (sometimes known as Herr Döktor)  Any event is greatly bettered for us by getting to spend time with him. Like Geof, he is a genius and a lynchpin of the steampunk community, also an almost frighteningly charming and engaging chap. He makes things that can barely be believed.

This ends part one of the Time Quake vendetta. We hope (as always) this finds you well, inspired and thriving.

Last week’s thunderstorms and wild seas cast a great many fish onto the bridge, and our platform out on the Devil’s Fingers.  Amongst the more usual residents of the ocean, was a mermaid. Once the storm abated, her enthralling singing drew many folks towards the bridge. Those of us who remember the last such experience stuffed our ears with wax and fabric to keep the singing out, and mounted a barrier on the bridge to keep people at a safe distance. Some of our younger men (my unfortunate nephew included) made efforts to get out to the mermaid, but we were able to keep them safe.

Our venerable Doc Willoughby, who really should know better, was completely overwhelmed, and, unable to gain the bridge, threw himself into the sea. He was fortunate, his clothing prevented swimming, and the mermaid herself was unable to get down from the platform, or else he would surely have been drowned and eaten. Jed Grimes had to knock him unconscious before the good Doctor could safely be returned to dry land.

When Doc Willoughby regained consciousness, and had his ears blocked, he was all for a few of us going down the bridge and ‘killing the ghastly creature’. There was much support for this and some folks went so far as to arm themselves. However, Sophie Davies made a plea for compassion. She asked if anyone had the decency to return the mermaid to the water. Not a single man offered to help. (In my defence, I was preoccupied with keeping the bridge closed). Annamarie Nightshade stepped forward however. We were treated to the unlikely sight of the Reverend’s wife and the resident witch assisting the mermaid back into the water. Despite their fierce reputations, the creature did not attack either woman, and made a rapid exit. It is said to be tremendously bad luck to kill one,  but worse luck still to be lured by their fatal music.