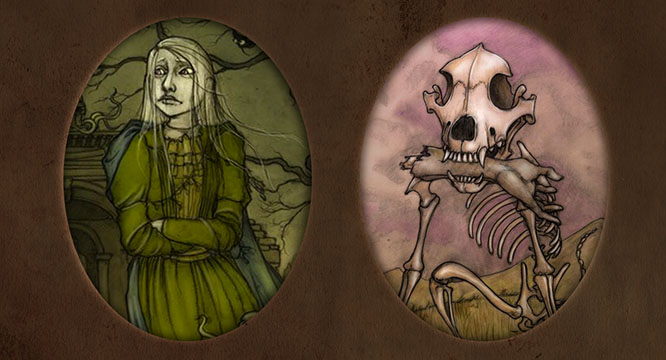 As has been noted before in these tales, the good folk of Hopeless, Maine, are not renowned for their love of walking. This, in many ways, is understandable. The island is a veritable smorgasbord of hazards, natural, supernatural and downright unnatural. The business of staying alive is tricky enough, without wandering around and taking unnecessary risks and – some would maintain –  unnecessary exercise. Philomena Bucket, however, was the exception to the rule. She loved to walk, especially in the early hours, with Drury, the skeletal hound, more often than not jogging happily along by her side. Despite appearances, Drury was not Philomena’s dog. He had been on the island for as long as anyone could remember and had but one objective in life (or death, depending on your point of view) and that was the pursuit of fun. At that moment, he considered Philomena to be the human most likely to provide the wherewithal to achieve this.

Our tale begins one grey, late summer morning. Summer mornings on Hopeless, it must be admitted, are very much like the mornings of any other season, except that it tends to get light earlier. So, it was almost 6a.m. when the sun finally managed to persuade the fog to let it through, the signal for Philomena to set off for her daily constitutional.

Philomena liked to vary the route she took for her walk. Some days she would wander up into the Gydynap Hills. On others, she might choose to stride out along the headland towards Chapel Rock, or maybe to the secluded part of the island which at that time was unnamed but known in later years as Scilly Point. Today, however, Philomena was feeling bold and decided to walk a particularly  long strip of narrow beach, only accessible at low tide. This was hazardous for a number of reasons. Besides the slimy, many-eyed and tentacled rock dwellers, whom Philomena felt could be avoided with Drury’s help, was the danger posed by ocean itself. While, even at low tide, these waters could be capricious, more worrying still were its denizens. Chief among these was the mighty Kraken, with suckered arms long enough to reach across the waves and drag the unwary into a watery grave. (Some say that the Kraken is as old as the ocean itself. Personally, I cannot believe this, but it is certainly ancient and quite pitiless).

Call Philomena brave, or merely foolhardy, but oblivious to any danger, she resolutely set off along the beach with Drury scampering happily along beside her. Within minutes an obfuscating sea-fog began to roll in, even more relentless than usual, until nothing was discernible beyond more than a dozen feet. Most people might have given up at this point but Philomena was nothing if not stubborn. Even Drury was slightly hesitant to proceed but emboldened by his companion’s determination, soldiered on with a spring (and a rattle) in his step.

Philomena was not able to say how far or for how long she had been walking. Fog tends to do that to the senses. Time and space can become meaningless in that grey cocoon and it is not unusual for one to easily lapse into an almost trance-like state. This was exactly where Philomena’s mind was hovering when she was pulled back to reality. There was a muffled drum-beat coming from somewhere in front of her, further down the beach. She stopped, wondering who, or what, might be making such a noise at this hour of the day. Then, to her surprise, she found herself suddenly confronted by the figure of a child, a boy with a drum marching through the mists.

“Are you lost, young fella,” she asked as he drew closer.

The boy looked at her with large, soulful eyes but said nothing, not missing a beat as he passed her by. He could not have been any more than twelve years old, Philomena reckoned.

“He’s too young to be out alone on such a dangerous spot,” she said to herself, seemingly unaware of her own vulnerability.

She turned to Drury.

“Come on Dru’, we’ve got to catch him up, before he gets into real trouble.”

She turned back, following the steady beat of the drum but her eyes were unable to penetrate the fog and see the drummer.

“Hey, slow down, we’ll walk with you,” she called but to no avail. All she could do was follow the rhythmic rat-a-tat-tat of the drum and hope the lad stayed safe.

The tide began to come in, forcing Philomena and Drury to scramble to safety. There was no sound of a drum anymore, just the crash of the waves on the rocks.

“I’d best go to the orphanage, the lad will be one of theirs, I guess.” She had aimed the comment at Drury; by now, however, the dog had lost all interest in the walk and was attempting to extricate a diminutive but somewhat irate gelatinous creature from a crevice in the wall.

The office was small and badly lit.  Miss Calder chose to remain standing while Philomena told of her encounter with the drummer boy.

“No, he’s not resident in the orphanage,” Miss Calder said sadly. “Although, I wish he was.”

Philomena rubbed her eyes. The fog must have really upset them for the woman in front of her seemed to waver slightly as she spoke. Once or twice – and this must be a trick of the candlelight, Philomena thought – half of her face even appeared to be little more than a skull.

“I think you were in great danger, Philomena,” Miss Calder said gently. “The Drummer Boy is known to me; a ghost who came to save you. Three fishermen were taken this morning, from just up the beach where you were walking.”

“Ghost? But it was broad daylight… well, except for the fog…”

“Ghosts are all around, Philomena. They don’t need darkness. The very need to manifest is enough.”

Philomena shifted uncomfortably in her chair.

“Long ago,” said Miss Calder, “a convict ship left England, bound for Virginia. A terrible storm blew it hundreds of miles off-course and few survived. Those who did settled on Hopeless but not all who made landfall lived to tell the tale. The boy you saw was part of the detachment of marines guarding the convicts – the drummer boy who used his drum to call the marines to quarters, an important role. I don’t know how, exactly, he met his fate, but the story is that, when they landed on Hopeless, he beat his drum to warn the others of a terrible danger – a danger that he did not survive. He has been seen a few times, over the years and generally thought to save only the good and innocent, like himself. You have been fortunate, Philomena.”

Philomena reddened and lowered her eyes. After the briefest moment she looked up to reply but Miss Calder had vanished.