Hello people (and others) Here we continue the story of how an image from Hopeless, Maine was made real by Nimrod Lancaster Fiona Sawle and  others in the steampunk creative community. Part one can be found here.
On the making of the masks and outfits
Nimrod made one version of his own mask, but two of Fiona’s
The body of each mask was Fosshape but the attached parts around the edge were mainly EVA foam sheet. plus two of his were wooden dowels. For the edge of Fiona’s I used two layers of EVA foam with stiff wire in between to make it stronger and pose-able. The top spike on his was 3D printed as was his medallion. The glass cabochons were painted using nail varnish and then Mod-Podge behind to give strength. The Fosshape was coated in liquid latex and then acrylic paints mixed with latex were applied over that. Fiona made her handbag from scraps of fabric left over from the outfits. The fabrics were sprayed with Dirty Down spray in various colours. The shells dangling from Fiona’s mask were collected from the beach in the Bahamas in February. Nimrod’s mask also has  dangling sharks teeth. Thin black fabric was glued behind the eye and mouth holes. The tentacles are removable for ‘ease’ of storage! 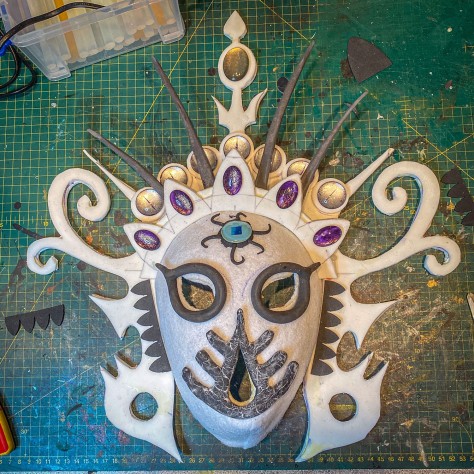 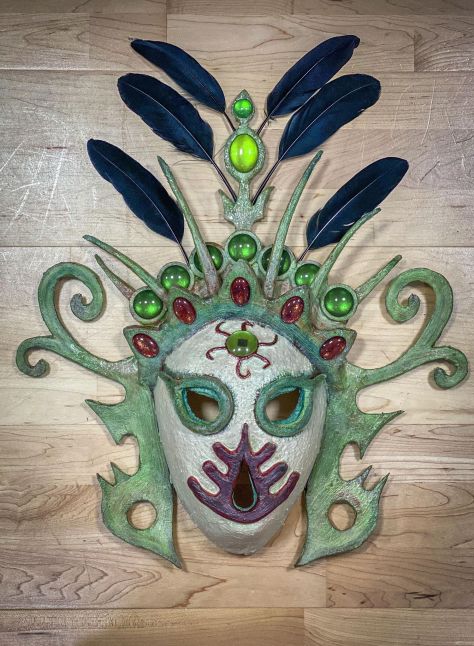 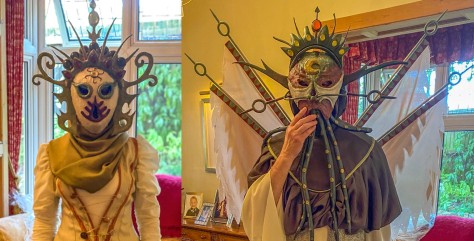