Being some words from The Keith of Mystery

And it’s that world, along with its creators Tom & Nimue Brown, that I find endlessly inspiring – responsible for generating so many bonkers ideas in my brain – usually late at night, and sometimes after beer!

So at some point, I was playing around with these random ideas and it occurred to me that the very opposite of the dark, frightening world of Hopeless, Maine, would be a happy, cheery, children’s book.

And then I thought – but what would a Hopeless, Maine children’s book be like? Well, clearly not like any other children’s book, that’s for sure! The idea led to some words, and once I had the story, I felt that I had to realise it in print. Fortunately, when I told Tom and Nimue about it they loved it – I distinctly remember Nimue’s reaction to it, which was to tell me I have a wonderfully warped and twisted mind.

The concept required something new in the way of an illustrative style from Tom – but luckily, he has worked on children’s books before – so he had a style in mind – at least for the beginning of the book. And his drawing, along with Nimue’s colouring, are perfect – wonderfully sweet and darkly dangerous, all at the same time.

I can’t tell you much more – that would give away the plot! But expect a story that starts all nice and fluffy and gradually becomes darker and more demonic!

And here’s a little taste of what’s inside…

In the months since his arrival on our island, Paul Jarman has made a number of startling suggestions. That libraries should be places where people can go to read and borrow books has divided opinions. Many young islanders are taken with the notion of having more reading material than my humble newssheet. A fair few people like the idea of a library as a place you might visit, not nervously avoid.

Our deceased Librarian Theophrastus Frog has maintained however, that people are not good for books and that frequently, books are not good for people and it is best to keep the two separately.

The launch of The New Hopeless Maine Library for People Who Want to Read was initially a success. Many book owners donated from their own collections, and offered their own writings. As a consequence, Paul Jarman’s new library had dozens of books in it, and regular visitors. However, in recent days things have taken a dramatic turn.

Paul’s body was found this morning, in a blood spattered scene that spoke all too clearly of murder. Paul’s ghost was very much resident at the scene as well, but unable to say anything useful about how he had died. What he did say, goes as follows.

So now we have two libraries with ghostly librarians who see it as their job to keep people out, and frankly, I do not believe this to be a coincidence.

The lovely Mark Hayes has generously given us many tentacles! (and reviewed the latest volume of Hopeless, Maine while he was at it!)

Better still (if such a thing can be imagined) he has put us in company with two of our favourite authors- Meredith Debonnaire  and Craig Hallam!

You will want to read it now, I expect. Well, you have only to click on the lovely tentacles in order to do so. 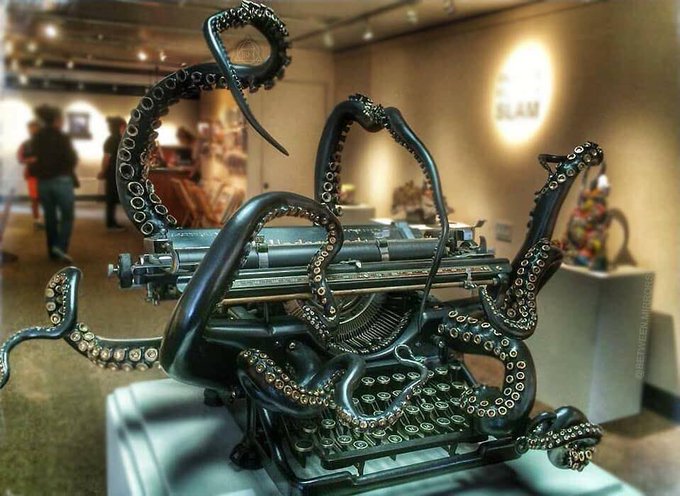 Hello, again people (and others).

If you have ever had a book launch or attended one and are not Neil Gaiman or JK Rowling you will know that they tend to be sad affairs rife with disappointment and stale snacks.

For this reason (among others) we have decided that we will not ever, ever, do that to ourselves or our friends ever again-ever (at all-ever) Besides which, despite our gloom tinted work, we are generally in favor of fun. (I hope you were sitting down for that) So, we thought, what’s fun then? Pubs. Pubs are fun. Music is fun. Having our friends in a pub with music and stories and poetry would almost certainly be fun. So, basically a party. (well, our sort of party, at any rate) Some of our favorite people have agreed to perform including Martin Pearson (of the Squid and Teapot), Meredith Debonnaire who has written some of our favorite pieces for the Vendetta (and introduced singing snails to the island) and Madeline Harwood, who is one of the best singers in the world. (she *may* be singing about….Dustcats) also Robin Collins! (Who brought us hairy coffee and other wonders) and two Keiths! One who created the Hopeless, Maine RPG, and another you have not met yet who is quite simply one hell of a writer. A Cup of Tentacles will sing songs of the island and songs evoking it. Massively Chuffed to say that local poet- Gary Death will be performing his Vendetta poem cycle also. This…is going to be a great deal of our sort of fun.

If you are in the area, please do come and join us. If you are not, there will be photos!

Hoping, as always, this finds you well, inspired and thriving

We have begun a thing.  We are making and publishing tiny books. Our first one (Lullaby for a Dustcat) took about two months from concept to having it out there among you. This is *Very* exciting for us because it creates a more immediate relationship with the book, as an act of creativity, and with all of you. (Yes, we love our publisher, Sloth, who brings out the graphic novels, but one a year is the limit there) So, Nimue and I will be making more of these. Probably three annually.

They really are tiny books. A6 size, which means that they can be sent instead of greeting cards in the same sort of envelope. They are very young-human friendly too.

This has also been made possible by Nimue’s Patreon people.  One level is that of Dustcat and she writes letters to them. (as though they were actual Dustcats) This poem/lullaby is one of those. Also- one of the illustrations and part of the border motif features the singing snail, which was brought to the island by Meredith Debonnaire who is one of our favourite writers and she is the one who brought singing snails to the Island. (Or as a way of getting to the island…) If you would like one of these tiny (but adorable) books you can do so by going here.

We hope (as always) this finds you well, inspired and thriving.