To say that the manner of his death had come as a bit of a shock to Father Ignatius Stamage would be an understatement. He had always been led to believe that ghosts were no more than harmless disembodied spirits, loitering in purgatory. He certainly did not expect Obadiah Hyde, the phantom Mad Parson of Chapel Rock, to crush his skull with a lump of stone. In fact, the whole business of death had turned out to be something of a disappointment. Following his unfortunate demise, Father Stamage had waited patiently for the expected triumphant ascent into the celestial realms. A month went by and nothing happened. Whatever could be causing such a delay? He didn’t think that heaven would be subject to bureaucratic slip-ups, but something was definitely not right.

Obadiah Hyde, meanwhile, had gone into a sulk, resentful of having to share his space with another ghost; worse still, one with no apparent fear of his ranting and raving. To add insult to injury, the rival ghost was that of a Catholic priest, a breed whose very existence was anathema to the old puritan. In protest, and much to the relief of Father Stamage, the Mad Parson disappeared huffily into the chapel ruins and refused to come out.

The priest watched impassively as a small band of men wrapped his remains up in an old sheet and carried them down the hill. He was not particularly sorry to see his corpse go. The passage of time, not to mention the attention of the ravens who lived in the ruins of the old chapel, had done nothing to improve its look. Even Rhys Cranham, the Night-Soil Man, had paled visibly when he discovered the body. Only old Drury, the skeletal hound, seemed to be unaffected by the sight, wagging his tail, giving the cadaver a thorough sniff-over and raising a hind leg to mark the spot (which, of course, he didn’t, but you cannot blame him for trying).

In the days that followed the discovery of the corpse, Drury became a frequent visitor to Chapel Rock. Despite himself, Father Stamage grew quite fond of him. The days when he believed Drury to be a demon from the lowest depths of Hell were long past, and now the priest recognised him for what he was; no more than a lovable old rogue who refused to acknowledge that he was dead. Briefly, Stamage wished that he had done the same thing, but on reflection realised that a skeletal priest wandering around might not be as warmly regarded as a mischievous dog.

There was only one cottage on the Night-Soil Man’s round that necessitated his walking past Chapel Rock. The output of its residents was such that Rhys only needed to visit every few weeks, and so a month or more passed, following the discovery of the body, before they needed his services again.
Rhys was surprised to see Drury, snuffling among the rocks, wagging his tail and generally acting as though he was there with a friend. Thinking that it might be Philomena Bucket out on one of her ill-advised adventures, he wandered over to where the dog was standing. It took him a moment to see the darkly-clad apparition of the priest flickering silently amid the rocks. Rhys had no fear of ghosts, except Obadiah Hyde, who scared everyone. Indeed, he enjoyed the company of those who chose to speak to him, for the existence of a Night-Soil man is a lonely one, on account of the constant nauseous reek that surrounds him. Happily, ghosts have no problem with such human concerns.
Father Stamage too was glad of someone to talk to, for although Drury was a pleasant companion, his conversation was limited to a series of barks, woofs and yaps.
As if there was nothing remotely strange about a man and a ghost chatting amiably, it was not long before the pair became friends and the priest told Rhys of the chase to retrieve his hat from Drury, and the fatal encounter with Obadiah Hyde.
The Night-Soil Man made a point of visiting whenever he could. It was pleasant to be able to go to Chapel Rock and not be terrorized by the Mad Parson, who still refused to come out while Father Stamage was haunting the place. Rhys, however, soon realised that his ghostly friend was far from happy.
“I became a priest to serve a community,” Stamage had told him. “In life I wanted nothing more than to be among people.”
Rhys pondered these words, and recalled that Marjorie Toadsmoor had expressed very much the same thing, needing to be among the living. Rhys wondered if he could help, as he had with Miss Toadsmoor, transporting her to the orphanage in a Marjorie-sized granite monolith.
“Where would you choose to be?” he asked. “Back at the orphanage?”
“I think not,” said the priest, sadly. “My brief sojourn there was not a particularly happy one. I’m dead Rhys and I want to be surrounded by good cheer, something to remind me of life.”
“I know the very place,” said the Night-Soil Man, “but how I can get a big lump of rock there for you to haunt might be a problem. It’s a shame that you have no possessions left; that often works. I’ve known of ghosts who have managed to reside in something as small as their pocket watch.”
Just then, as if on cue, Drury appeared with a shapeless and much-weathered piece of felt in his mouth.
“My hat!” exclaimed the priest. “I wondered where it had gone.”
He regarded Rhys with eerie green light in his eyes.
“Do you think… “ he began,
“There’s only one way to find out,” replied Rhys.

Philomena Bucket found the hat hanging on the front door of The Squid and Teapot, with an explanatory note attached to it, penned in the familiar scrawl of Rhys Cranham. Much as Philomena disapproved of clergymen of any persuasion, she could not bear to think of anyone sharing eternity with Obadiah Hyde.
Bartholomew Middlestreet, the landlord of the inn, placed the remains of Father Stamage’s hat safely in a box, and stored it in one of the attic rooms.
“As long as he doesn’t drive away my customers, I’m happy for him to haunt The Squid,” he said generously. “He’ll be able to keep Lady Margaret company. She’s got a few hundred years of confessions to offload, so that should keep them occupied for a while.”
Lady Margaret had once revealed to Philomena some of the more salacious details of her short, but somewhat scandalous, life. The barmaid grinned to herself. She hoped that Stamage didn’t blush too easily.

Clothes are much more reliable than the idea of clothes. 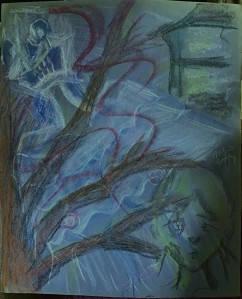 What is presence? Memory and the idea of self. Who we think we are, or were, or should be.

When a person is calm, it is easy to remember what was considered proper. The correct fall of drapery. What to hide, and what to cover and what to walk through this world pretending does not exist.

Having feelings makes it all so much harder. Feelings without a body make so much less sense, because feelings belong to the body that no longer exists. With feelings, it is harder to concentrate and so I do not always remember what of my body should make itself known. More often bone than breast, but it is all equally indecent in its own way. It is easy to reveal too much and the afterlife lacks for privacy.

Feelings and thoughts – these are the most real things. I clothe them accidentally with memory, with my resting bones and half recalled face, with the idea of clothes and a lingering desire to uphold the kinds of standards the living would appreciate.

Does my skull trouble you more or less than my nipple? I cannot ask, it would be one immodesty too far. One indecency too many. I know this. I just cannot, for the life of me remember why it was so important. Why one shred of memory is more indecent than another.

These are just ideas about who I used to be, but the living are fragile and a human body is such an ephemeral thing.