It was midnight when the full moon rose over Hopeless, Maine, to welcome in the Vernal Equinox. It shone palely through the grimy window of a small, candlelit room where a young mother was giving up her own life in order that her baby should live. The year was 1905 and Betty Butterow was about to become the newest, and by far the youngest, child in the orphanage.

Even as he took her from the weeping midwife’s arms, Reverend Crackstone disliked the girl. It was not totally irrational; while there was nothing in particular that he could identify to mark her as being remotely out of the ordinary, he knew her ancestry only too well. According to the information that he had been given her mother was Amelia Butterow, an unmarried woman who had lived on the island for all of her short life. What irked Crackstone was the knowledge that Amelia was a direct descendent of the O’Stoats, a  family riddled with heathen tendencies. Not just any branch of the family, either. Colleen O’Stoat, Amelia’s great grandmother, was known to have had the gift of ‘The Sight’. During her lifetime there had been tales of witchcraft and shape-changing told about Colleen which had, over the years, grown in the telling. Added to this the fact that there was no clue to as to whom the child’s father might be only served to strengthen Crackstone’s disapproval of her. These Godless and immoral practices had always been all too common on the island. Time was no healer, in this instance. The passage of the years did nothing to dispel his hostility towards Betty, who was growing up to be quite stunningly beautiful, though no one ever told her so. The reverend gentleman was more than relieved when, at the age of fifteen, she left the orphanage to watch a cricket match and decided, for reasons best known to herself, never  to return.

Betty was a sensitive girl and acutely aware of Reverend Crackstone’s chilly indifference to her. She assumed that it must be her fault, somehow. She knew of her disreputable lineage; Crackstone had mentioned it in disparaging tones more than once, and she decided that she must have been born with wickedness flowing through her veins. Trying to ignore these thoughts, she left the orphanage and went to the cricket match at Creepy Hollow with mixed feelings. Although her fellow orphan, shy and introverted Randall Middlestreet, was blissfully unaware, Betty had developed something of a crush for him. Her heart would race, her cheeks flush and her knees turn to jelly on the odd occasions when he spoke to her.

That trickster, Cupid, plays a cruel game when he fires his arrows, for now that Randall had become apprenticed to the Night Soil Man he was beyond her reach forever. It was an unwritten rule on the island that Night Soil Men were unmarried, unattached and, save for their apprentice, solitary. Even, in the unlikely event of her being willing to put up with the more anti-social aspects of his job, the islanders and indeed Randall himself, would not have tolerated such a breach of tradition. From now on she would have to be content with seeing him from afar, if at all. Today, however he was allowed to play in the match; she really hoped they might have a chance to spend some time – maybe their final time – together.

She was disappointed to find, upon reaching the impromptu cricket ground, that he was nowhere to be seen. Betty had no idea that, due to a misunderstanding, Randall had gone to another part of the island altogether. Crackstone had done a good job in destroying any self-esteem Betty may have possessed and Randall’s absence was all that was required to convince the girl that he was going out of his way to avoid her. Walking along the headland, lost in her own thoughts, she allowed this erroneous belief to blossom; it grew inside her mind like a cancer.  Was it because people could see her as she really was? Ugly and horrible? Hideous even? Is this really what everyone thought of her? The world saw her as some foul creature to be avoided at all costs.

Nothing, of course, could have been further from the truth but each new thought was increasingly irrational and had her descending ever deeper into The Slough of Despond. Beaten down with self-loathing she walked blindly on until, finding herself by the shore, she decided that maybe the best course of action for all concerned was for her to end her life there and then. At least everyone would be spared the burden of her continued existence; she would walk into the ocean and never return.

Even in this unbalanced frame of mind, however, her first thought was for others. Everything on the island was in short supply; it would be selfish – sinful even- to destroy a perfectly good, albeit seventh-hand, set of clothes when another girl would be happy to wear them. With this in mind and with an uncharacteristic lack of modesty, she took off every stitch of her clothing, folding it neatly on a rock where the waves could not reach. Then, closing her eyes tightly, she waded into the mist-bound  ocean.

The icy chill of the wild Atlantic took her breath away but she knew what had to be done and steadfastly carried on. By the time the water was lapping around her thighs her body was blue with the cold. Soon it would be over. No more cold, no more ugly thoughts. No more rejection. No more…oooh… her descent into the waves was terrifyingly accelerated as a deep shelf beneath the waterline caught her unawares and before she knew it there was salt-water in her eyes, ears and nostrils. Tendrils of seaweed – she hoped they were seaweed- wrapped themselves around her legs.  Despite her plans to die, some primitive survival instinct made her kick out and try to escape. She thrashed ineffectively in an attempt to clutch on to life at all costs but it seemed to be to no avail; every movement made her predicament worse. Then, for reasons she could not fathom, she became perfectly relaxed and a great calmness came over her. Closing her eyes once more, she felt a comforting warmth enveloping every inch of her frail form, cosy and caressing, like a soft blanket. She was not breathing but strangely, she no longer seemed to need to. If this was death then it was not so bad – but no, she knew that this was not death. This was life in its truest form, with every sense vibrant and alert with a strength and certainty that rushed through her blood and sinews in a way that she had never before felt. Fearing nothing now, she threw herself into the embrace of the ocean, giving everything up to its irresistible will. Opening her eyes for the first time since her fears had subsided, Betty received the biggest shock of her young life. Her limbs had receded far into her body and where there was once pale flesh there was now a mighty grey frame of muscle and a warm, insulated hide.She had become a seal, strong and free and mistress of the seas. Then, as she swam, joyous and reckless, she remembered. This was not her own memory but the memory of soul, the memory of blood; the memory of bone; the memory that flowed through the countless generations of her kind. She was a Selkie, a seal-woman tasting the freedom of her birthright for the very first time. She knew then that her doubts and fears were groundless. Breaking the surface of the water, the seal that was Betty looked at the island with different eyes. Not only had her body changed but so had her perception. Where once there were only mists, there were now ghosts. Even from this vantage point she could feel their loneliness, sorrow and sometimes rage. These, she realised, were the gifts of her ancestors; ancient gifts that they had brought from a distant land when they fled persecution.

Little did she realise, as she revelled in her new body, that the greatest gift she had been given that day was a powerful sense of self. The despondent Betty who had left the orphanage that morning had died and had been re-born.

Having circled the island, roaring and bellowing and savouring her new-found abilities, she decided to rest. Finding a suitable spot she dragged herself up onto the rocks to bask for a while and as she slumbered, so she dried. Gradually a change came upon her. The comforting, heavy sealskin slowly sloughed off and once more the Selkie became Betty, shivering and naked as the day she was born. Waking, she instinctively folded the skin and concealed it in the rocks, promising herself many more Selkie adventures in the days to come.

It was purely by luck that Madrigal Lypiatt was alone when she made her way back to the Squid and Teapot after the cricket had finished. Seeing a naked girl sitting on the rocks was not a common sight on the island and Madrigal made it her business to find out what was going on. Betty’s story about going swimming did not fool Madrigal for one moment. No one in their right mind would swim in these treacherous waters but having no better explanation, accepted what the girl had told her without argument. Throwing her shawl, which was fortunately of generous dimensions, around Betty the two quickly made their way back to the inn, thankful that most people were still hanging around Creepy Hollow, barely able to believe their eyes after Crazy Wally’s dramatic departure from the island.

It did not take Madrigal long to work out that Betty was unhappy at the orphanage. Astutely, she wondered if the alleged  swim was really something much more dramatic, possibly a drastic effort to escape its walls forever.To send her back would cause nothing but harm. Fortunately, a good landlady is never short of a plan or two and, following a short conversation with her husband, Sebastian, a solution was hit upon. Betty found, to her great delight that The Squid and Teapot had acquired in her a new barmaid who would work for board and lodgings. A cosy attic room in the inn was to be her very own, a luxury that she had never before known. Betty Butterow was home at last.

Few of the wild creatures found in any known zoological taxonomy venture very close to the island. Even fewer live to tell the tale. Many folk were surprised, therefore, to hear that a full-grown harbor seal had, on several occasions, been seen boldly swimming close to the rocks. There was talk in the Squid that this was an omen, maybe things on the island were set to improve. From her position behind the bar, Betty Butterow, gently blossoming into womanhood and still tasting the salt-water tang of the sea in her nostrils, quietly smiled. She mopped the ale slops from the counter and said nothing. 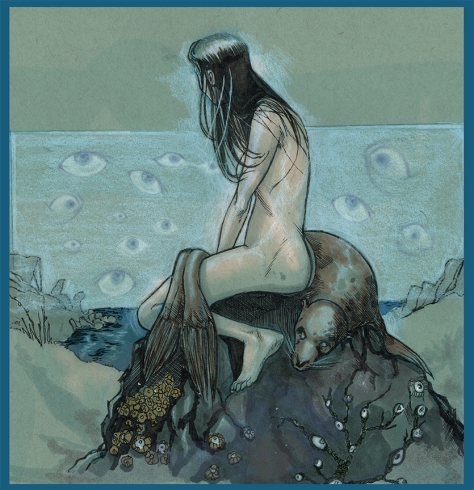